What: Five Guys Named Moe
Where: Marble Arch Theatre, London
Who: A funky, fun theatre experience in a brand new theatre
When: Until February 17, 2018
Why: A great show and a fantastic bar area make for a great night out! 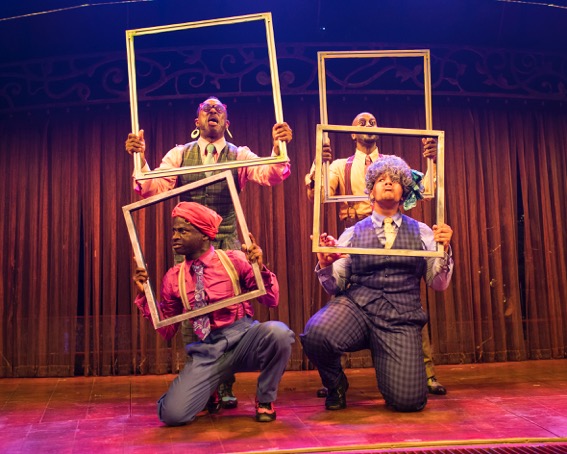 There’s a new theatre in town, it’s fabulous, and the show now playing at this theatre is fabulous as well.

The Marble Arch Theatre, which is an Underbelly production (the team that brings us the excellent shows in the Southbank), is cleverly located right next to the arch in Marble Arch, is the newest theatre to pop up in London. It’s a gorgeous 650 seater wooden structure that includes a very large bar and an auditorium with a stage that is semi-circle in the round, a design that reflects the 1940’s New Orleans Jazz bars. And theatregoers will be able to take their seats at the cabaret tables in the Funky Butt Club and have drinks served directly to their tables for an up-close and personal musical experience all around them. And the show at this new theatre is “Five Guys Named Moe,” which is a show about Five Guys Named Moe (Big, Little, Eat, Know and Four-Eyed) who give guidance, advise and support to Nomax, who is single, broke and lamenting about a broken relationship with a woman named Lorraine. The Moes sing and dance their way throughout this two-hour very lively extravaganza, while Nomax (played by Edward Baruwa) takes it all in. Songs, featuring the hits of original jazz king Louis Jordan, include “Early in the Morning,” “I Like ‘em Like That,” “Safe, Sane and Single,” and “Ain’t Nobody Here But Us Chickens” are sung by the Moes in such a fun and unique style. And there is also quite a bit of audience participation. One member of the audience who was chosen to recite some sentences on the night I saw it, and it was none other than stage and movie star Freddie Fox. The Audience also gets to outdo each other, with the help of the Moes, in a sing-a-long that provides raucous laughter. It’s the oldest trick in the book to include the audience in the show to make sure they are having a great time, and the Moes use it to their advantage.
“Five Guys Named Moe” is based on a musical of the same name by Jordan in 1943, and has been around since it’s 1990 UK debut (and a 2010 UK revival). With a book by Clarke Peters, if feels like this show has never left London. But if you’ve already seen it, seeing it again at the new Marble Arch Theatre will be a whole new experience, and perhaps more of an enjoyable one in a setting that matches the fun and frivolity of the show. Kudos to all the Moes who make it a fun night out (Ian Carlyle, Idriss Kargbo, Dex Lee, Horace Oliver and Emile Ruddock) and to Underbelly for copying their successful formula to Marble Arch, and to the production team for pulling it off and producing one big party.
They’ve just announced that “Five Guys Named Moe” has been extended to 17 February 2018 due to overwhelmingly popular demand. Tickets are on sale now, get yours here:
https://www.fiveguysmusical.com
Photo from The Corner Shop PR
Review by Tim Baros