The International Fashion Council, together with The Opulence Events LLC, started with full zeal. The event was also patronized by The Royal Office of Sheikh Ahmed Bin Faisal Al Qassimi, represented by His Excellency Tomasz Zaleski, Chairman.

The legendary Michel Adam was present for the inauguration ceremony and cut the ribbon with other great people. He also appeared on Finale day to witness the Miss FTV & IFWD and stayed the whole evening. His wife and daughter was present Maria Lisowski and other VIP guests with him Paolo Virgili, Maximilian Edelweise, Alexa Edelweise, Ron Skida, John Skida.

Wassim Mandil the Media Icon, as usual, presented the show with full zeal as the official MC of IFWD. He engaged the audience with his charming personality whilst putting up a fantastic show for everyone and the media.

IFWD is an exclusive Luxury Red Carpet Event had many segments which attract its audience and entertain them.

A brand from Poland, Jab Petelicka, has opened the season with dramatic attention to handcraft and embroideries that embodied the brand. Evening gowns and couture bodysuits were the most featured silhouettes on the runway.

Tania Costa from Bulgaria, based in Kuwait, brought her extraordinary collection of hats that were handcrafted. She was delighted to present her collection in IFWD season 12

Noza Nova Poland has showcased their Polish label and presented a sustainable collection. They believe in sustainability, which brought extraordinary attention to the audience, especially to Her Highness Sheikha Jawahar Bint Khalifa Al Khalifa.

Raid has from the Maldives had their ethnic collection to show the world their culture. She mentioned in her interview that she had been to various big shows in the world but had never seen such an organized event. With so many high profile people attending the show at International Fashion Week Dubai, she also mentioned other events do not care about their designers. IFWD started with a luxurious gala dinner and an amazing after-party at the Iris Club.

Finale designer: Ali Assad from Syria.   Ali Assad, based in UAE, joined IFWD season 12 and presented a lovely couture collection with beautiful pastel colours, which were the style statement for the evening. He was genuinely obliged by IFWD to give him a chance to display his collection on this massive platform.

Day One followed by the Gala Dinner after the Finale show in the presence of all important people.

Emirati designer Yasmine Mohammad Kamel & Jeasrc Laire Estaca (Filpino) from Miller Couture had a fantastic evening and bridal wear collection. The audience remained mesmerized with the collection, so much so that the hall went into pin-drop silence during the show. She thanked the IFWD team for putting up such a wonderful show.

Anna Cashmere from Mongolia brought the most expensive Cashmere outfits to display at the event. The elegant and straightforward Cashmere collection became famous on the ramp of IFWD.

Dorota Goldpoint Poland joined for the 3rd time. Each time she brings something unique to prove her abilities as a very diversified designer. In IFWD season 12, she presented the culture and beauty of Poland’s traditional wear with beautiful floral designs with a floral head crown to lovely models. It truly represented the beautiful country of Poland. Her collection took away the hearts of the audience.

Noof Al Maazmi, Emirati Emerging Designer, who was the winner of the S11 competition, presented very creative outfits at the ramp of IFWD, with a very exclusive style of UAE.

Liliana Larisa from Romania presented the definitive collection from Romania, representing her country in a big way.

Sabina Skalny Poland held the closing Show of IFWD day 2. her luxurious formal wear is stitched with extra care; the brand’s mission is to provide impressions and great emotions by surrounding people with the highest quality materials and forms prepared each time at the individual customer’s request. Their jackets represent the human personality and are its complement and the missing link. They embody his dreams and help overcome demons.

Philippine Couture Brand Garimon Roferos Couture presented the SS22 collection that aimed at the elegance of women. His high sense to raise women is the most elegant way by his innovative ideas and creations. The high-end evening and bridal collection represented the charisma of women beauty as seen in his collection. Michal Cinco and Ezra Couture witnessed his show at IFWD.

New concept show as always IFWD presents something new on the ramp, Dazura Agency, the first Emirati modelling agency launched in UAE, to cater to talent and modelling assignments in near furniture. They had breathtaking models from their agency on the ramp of IFWD. 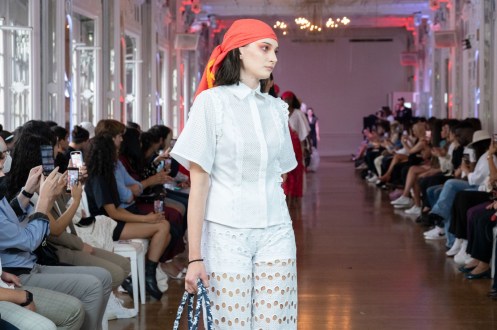 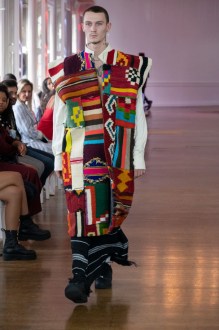 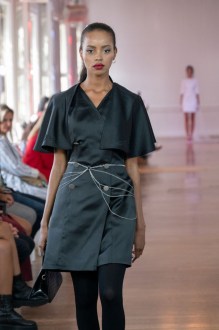 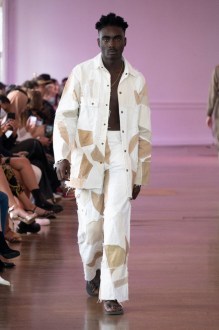 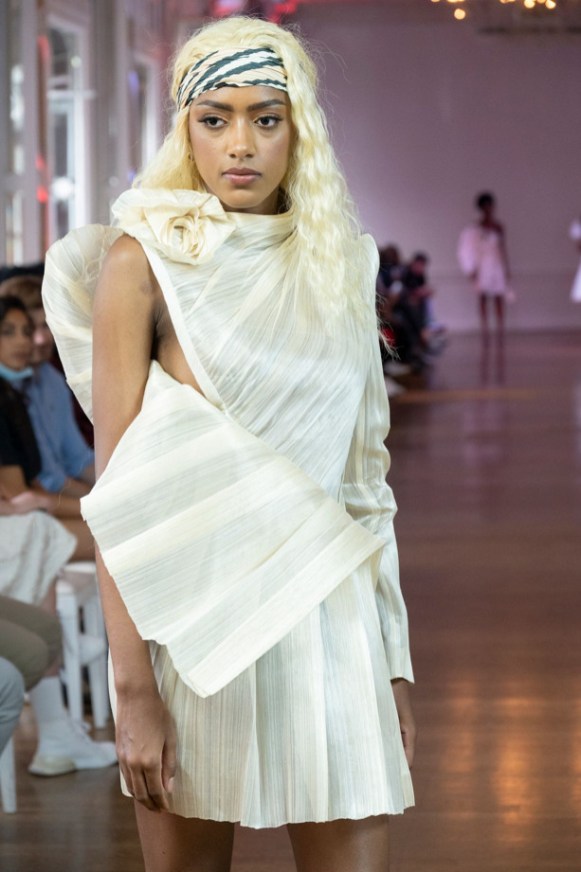 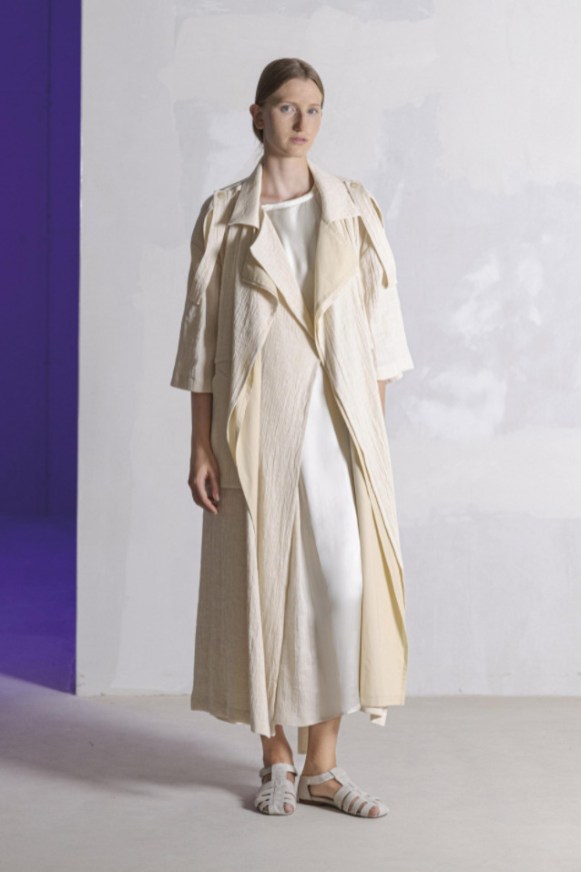 Saeed Omari, a Syrian designer, based in UAE, presented his causal wear and specializes in textile designing.

The Finale Turkish designer Pinar Bent has showcased her SS22 collection featuring bridal couture gowns, which is every woman’s dream; she worked in detailed work on her display, which dazzled everyone’s heart. It was a celebration of the ramp of International Fashion Week Dubai Season 12, the flair of her designer took away the hearts of every person sitting in her show.

It’s not the end yet. The twist in the show, FTV & IFWD, joined forces together to organize Miss FTV & IFWD, which created an amazing show for everyone to witness. Everyone was mesmerized to see the 30 beautiful models competing for the Miss FTV crown. After the jury judged them, five winners were announced. We witnessed Michel Adam, founder of FTV and his VIP guests sitting in the audience during this segment. Designers who dressed the models were PIU – Poland, Folk Designs Poland, and Ali Assad Syria.

International Fashion and Excellence Awards were presented to the 30 most influential designers and Royals and Dignitaries of UAE to celebrate the 50th Anniversary of UAE.

International Fashion Week Dubai Season 12 was an extraordinary show and proved to be the best and the Biggest Fashion Week of Dubai /Middle East / GCC and the world.

When we spoke to Founder and Managing Director Ms Cheryle Dias, she, as usual, was smiling and saying we did it once again. She says all thanks to the Almighty for giving her the energy to put up such a show. She expressed that each and everyone present at the show congratulated her for this big achievement. She said now the responsibility is even more prominent after this tremendous achievement, and she will be back to work after two days; she smiled; :), The Legendary Lady Cheryle Dias.

In the end, this kind of professionalization and perfect organization has not been seen lately, and Cheryle Dias proved it and made this hands-on show the ideal example for all of us.

Any use of handheld mobile phone while driving to become illegal

Cristerley Etienne Wins the Title of Most Beautiful Man of Europe