The medals for the IAAF World Championships London 2017 show a clockwork design and equipment from every event at the Championships. 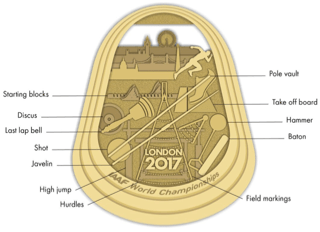 Based within the shape of an athletics track, the medals are layered with symbols of every event on the schedule, an intricate design that bears resemblance to the inner workings of a watch.

With London the historical home of Greenwich Mean Time, they also feature iconic London landmarks that sit on the River Thames – Tower Bridge, the London Eye, the Shard and Big Ben – to give a strong sense of location.

The medals were designed by Birmingham-based Toye, Kenning & Spencer who asked themselves “What makes an athlete tick?” when creating the medals. Founded in 1685, Toye, Kenning & Spencer have a proud history, holding a royal warrant and being commissioned to manufacture the medal presented to serving personnel in celebration of the Queen’s Diamond Jubilee in 2012.

Some early brightness, however cloud will soon bubble up with showers then developing. A sunny end to the day for with any showers quickly dying away this evening.

Mo Farah set the home crowd alight with victory in a fantastic 10,000m final to win the first gold medal of the Championships. Farah twice stumbled during the final laps but kept his composure to take his number of Olympic and world titles to ten.

Preceding Farah all of the big names progressed through the 100m heats. Usain Bolt won his heat in 10.07 seconds but will face competition in later rounds from fellow Jamaican Julian Forte who was the only one to dip below ten seconds with a 9.99 run.

The women’s 1500m heats were dominated by Genzebe Dibaba and Caster Semenya, the pair the only two athletes to register a sub 4:03 minute time. The semi-finals will see four Brits in action with Laura Muir, Laura Weightman, Jess Judd and Sarah Macdonald all qualifying.

There were surprises in the field events as Jenn Suhr and Jeff Henderson failed to qualify in the women’s pole vault and men’s long jump respectively. Katerina Stefanidi needed just one vault of the automatic qualifying height of 4.60m to secure her place in the pole vault final. Radek Juska qualified first in the long jump.

All eyes will be on Usain Bolt this evening in the men’s 100m as he bids for a 12th world title. Jamaican teammate Julian Forte was the only athlete to go sub-10 in yesterday’s heats, with world leader Christian Coleman amongst the 24 athletes lining up for the semi-finals at 19:05.

Almaz Ayana and Tirunesh Dibaba are among the contenders in the women’s 10,000m at 20:10 while the women’s 1500m semi-finals from 19:35 feature Genzebe Dibaba, Olympic Champion Faith Kipyegon and South African Caster Semenya.

The women’s heptathlon gets underway in the morning with the 100m hurdles (10:05) and high jump (11:30) scheduled. Olympic champion Nafi Thiam goes off favourite while there is British hope from Katerina Johnson-Thompson. The shot put (19:00) and 200m (21:00) complete the four heptathlon events listed for the night.

Women’s hammer qualification groups will be in action at 10:35 and 12:05 and the women’s triple jump qualification begins at 11:00.

On the track, Olympic champion Wayde van Niekerk goes in the men’s 400m heats. The women’s 100m gets underway at 11:45 with packed field including Dafne Schippers and Elaine Thompson as does the men’s 800m at 12:45 without the injured David Rudisha.

“This is amazing – so many people at a qualification. Breath-taking. It gave me a lot of energy. I already know that I will feel at home in this stadium next time.” 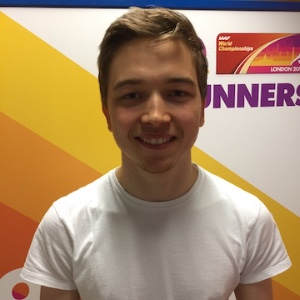 Fun Fact:
David loves to watch the outfield action – his favourite event to watch is the pole vault!

The Restory: Refashioning for Festivals