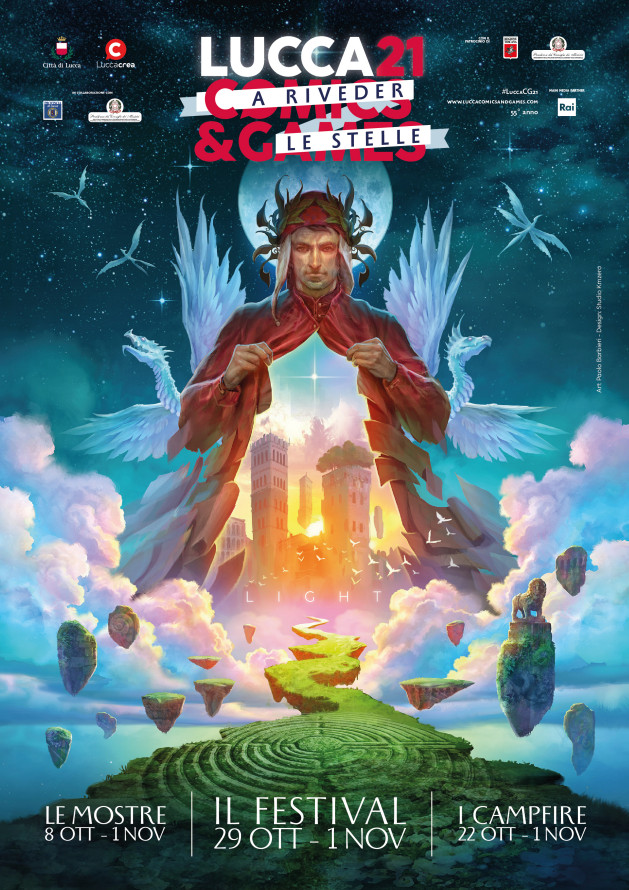 The master of comics Frank Miller, creator of ‘300’, ‘Sin City’ and ‘The Dark Knight Returns’, will be in Lucca for the presentation of the documentary dedicated to him, Frank Miller – American Genius, by director Silenn Thomas. The film explores half-century-long career of the author, who became a point of reference for the art of storytelling, pop culture and politics thanks to his work. From complicated personal affairs to worldwide success in print and film, the documnetary is an epic journey into the mind and heart of one of the most prolific and iconic authors of our time.

Roberto Saviano, the author of Gomorrah, a best-selling exposé of the Camorra Mafia in Naples. will be attending to promote is first graphic novel called Sono Ancora Vivo (I’m Still Alive) with drawings by Tel Aviv-based illustrator Asaf Hanuka.

In gaming, Riot Games will be showcasing Arcane. The exhibition will include a series of original sketches artwork and two very special collaborative handmade pieces, the boots of Jinx and the hextech glove of Vi, the two sisters protagonists of the series, on display. The exhibition will be held at the ex-Museo del Fumetto (Comics Museum) and include works dedicated to the cities of Zaun and Piltover for a unique and perfect experience to await the imminent release of the TV series Arcane, available on Nexflix from November 7th.

Netflix will be hosting a special event dedicated to The Witcher with a special panel. Kim Bodnia, who joins the cast for series two as Vesemir, will be joined by Joey Batey, who plays Jaskier. Series creator Lauren Schmidt Hissrich, costume designer Lucinda Wright and production designer Andrew Laws will be in attendance.

The Walt Disney Company Italia will be present at Lucca Comics & Games 2021 to present some new titles coming to the cinema and on Disney+. The new Disney animated film Encanto and Disney+ will also present the Italian premiere of the first two episodes of Dopesick – Declaration of Addiction, starring Michael Keaton.

Searchlight Pictures films The Dark House and Antlers – Insatiable Spirit will be shown at Lucca Comics & Games 2021 with special screenings.

Emanuele Vietina, Director of Lucca Comics & Games says “Lucca Comics & Games is the biggest comic convention in Europe, a cultural festival dedicated to storytelling and modern forms of art. Lucca is a also a community event merging the modern mythology of comics, movies and rock with the Italian monumental heritage of a historic tuscan town. This year, we offer a unique program which presents Frank Miller alongside Roberto Saviano and brings back major film studios such as Disney and Netflix to Lucca. Bringing this festival to life after a difficult pandemic year is our own way of celebrating Pop Culture.”

Cans of the World From Pepsi